One of the incredible street foods of the Arab world, falafel (gluten free) version is the authentic one to try.
Jump to Recipe Jump to Video Print Recipe 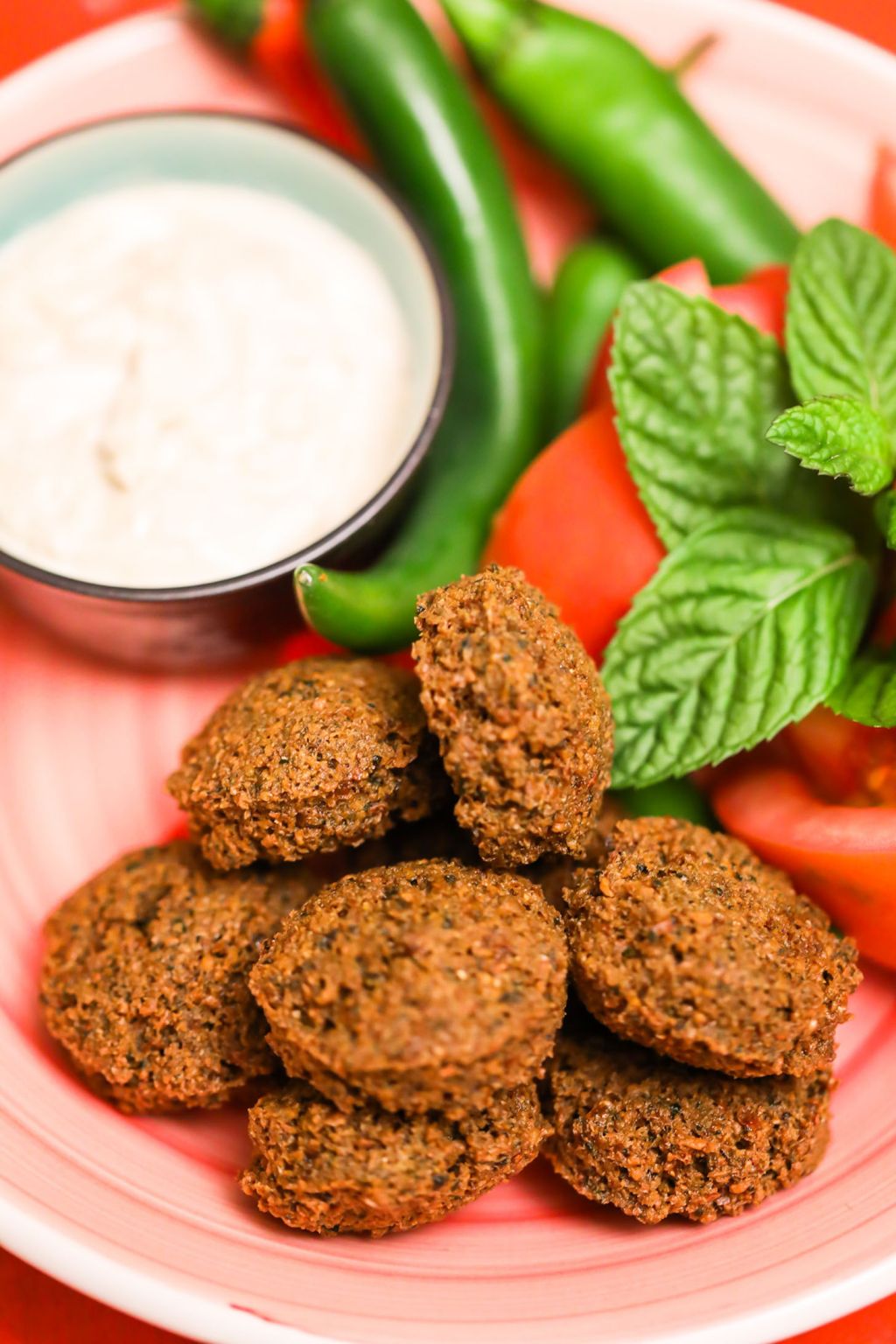 One of the incredible street foods of the Arab world, falafel (gluten free) version is the authentic one to try.

This is a food that is only truly good when it is hot, it has a window of about an hour after which it’s not really very good.

In countries outside the Middle East falafel is sold in all kinds of non-fresh and less than ideal ways.

People don’t know any better until they try a falafel straight out of the deep fryer from the falafel man himself!

A good falafel sandwich with hummus, hot sauce, salad, mint leaves, and a little bit of lemon, and you’ve got it made.

I remember being in Jerusalem when I was little getting the best falafel from a hole in a wall place near the Old City.

Abu Al Abed was the guy’s name, and he literally sold the falafel out of his front door, and they were the best.

It is the recipe as well as the freshness that make falafel good.

They have to puff up when cooked and be full of air with a thin crispy skin around the edge with a soft moist inside.

Here in Jordan there are a few places with great falafel that make their own pita bread as well.

Fresh falafel, fresh bread, what is not to be totally in love with?

I get hungry just by thinking about it.

Eaten with or without bread falafel is exponentially better when served with a tahini, yogurt dip so be sure to add that.

We have a falafel place locally called Jerusalem Falafel which is often voted the best falafel in town.

It’s been around since 1966 and makes a mean falafel sandwich.

In fact, a sandwich is the only way you can get falafel there as they don’t sell them per piece.

Many places will sell falafel by the individual piece as well as in a sandwich.

It has been said Jerusalem Falafel only sell theirs in a sandwich so that nobody will figure out their secret recipe.

I’m not sure about how true that is, and their sandwich is pretty darn good.

Made with tahini sauces, tomatoes, pickles, and optional hot sauce.

Even the king of Jordan and his family are frequently seen getting a sandwich here. 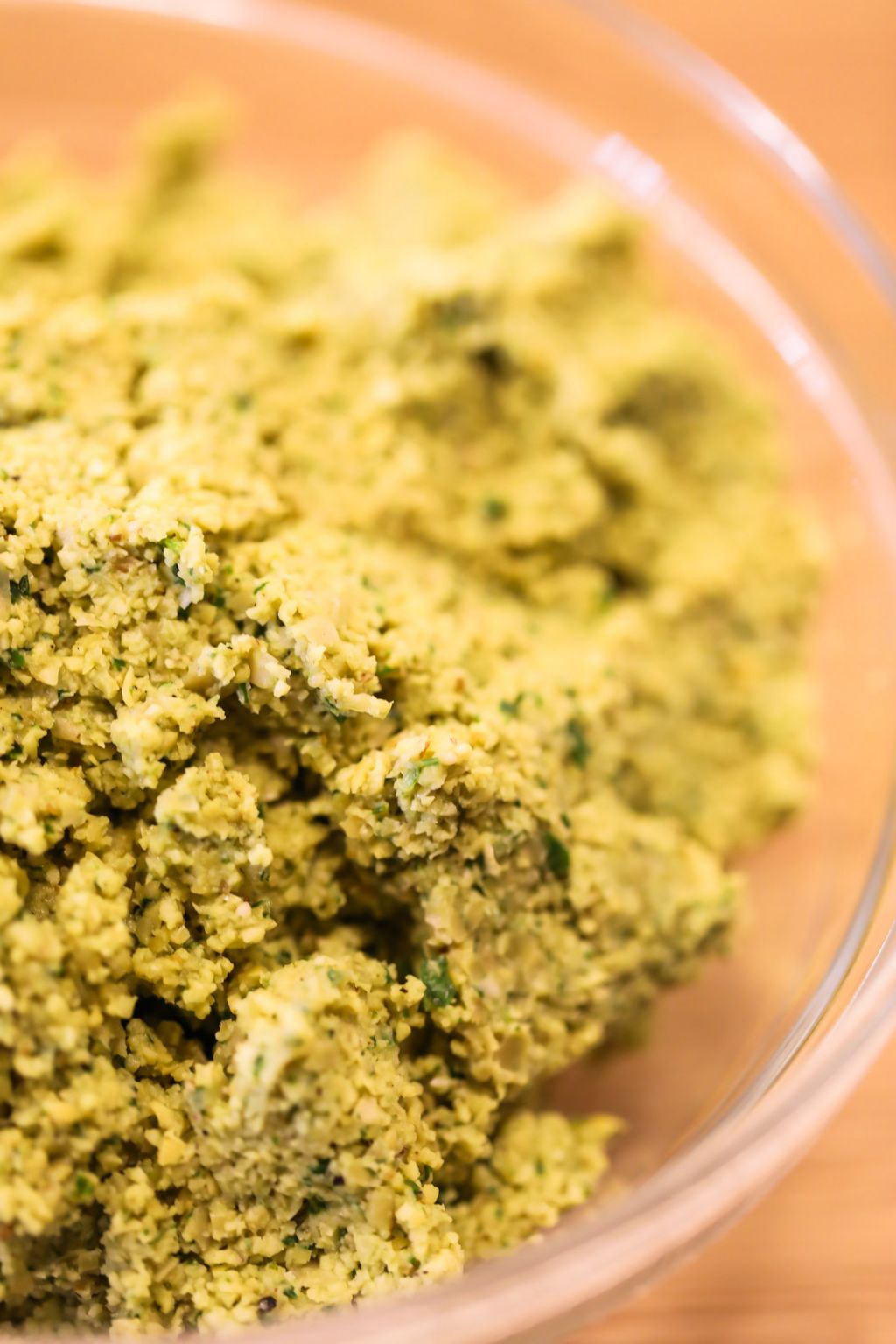 Falafel is a kind of a croquet-fritter type thing made from chickpeas, spices, and some herbs.

Deep fried and served hot, usually for breakfast or lunch, there is no right or wrong time to eat falafel gluten free.

The reason this is such a staple in Arab countries is that it is very filling, nutritious, and very cheap.

There are some varieties of falafel that incorporate fava beans as well as chickpeas.

The Egyptian version is exclusively made from fava beans and locally known as ta’amiyeh.

Both these legumes are high in fiber and nutrition and falafel is appealing for those with less money.

But like so many of the best dishes around the world, they are the ones that are cheap and available to the masses.

Where is Falafel From?

It is believed that falafel originated in Egypt where it was first made from fava beans.

It then moved to the Arab countries of the Levant where the fava beans were replaced by chickpeas.

There is a myth that falafel, like hummus, is Israeli food.

However, Israel has only been in existence for seventy years and those foods are thousands of years old.

Falafel was incorporated into the diet of the earliest Jewish settlers to Palestine.

Palestinian family recipes were shared with them by their Muslim and Christian neighbors.

This food was good, hardy, sustenance and kept you full while you worked the fields.

What is Falafel (Gluten Free) Made Of? 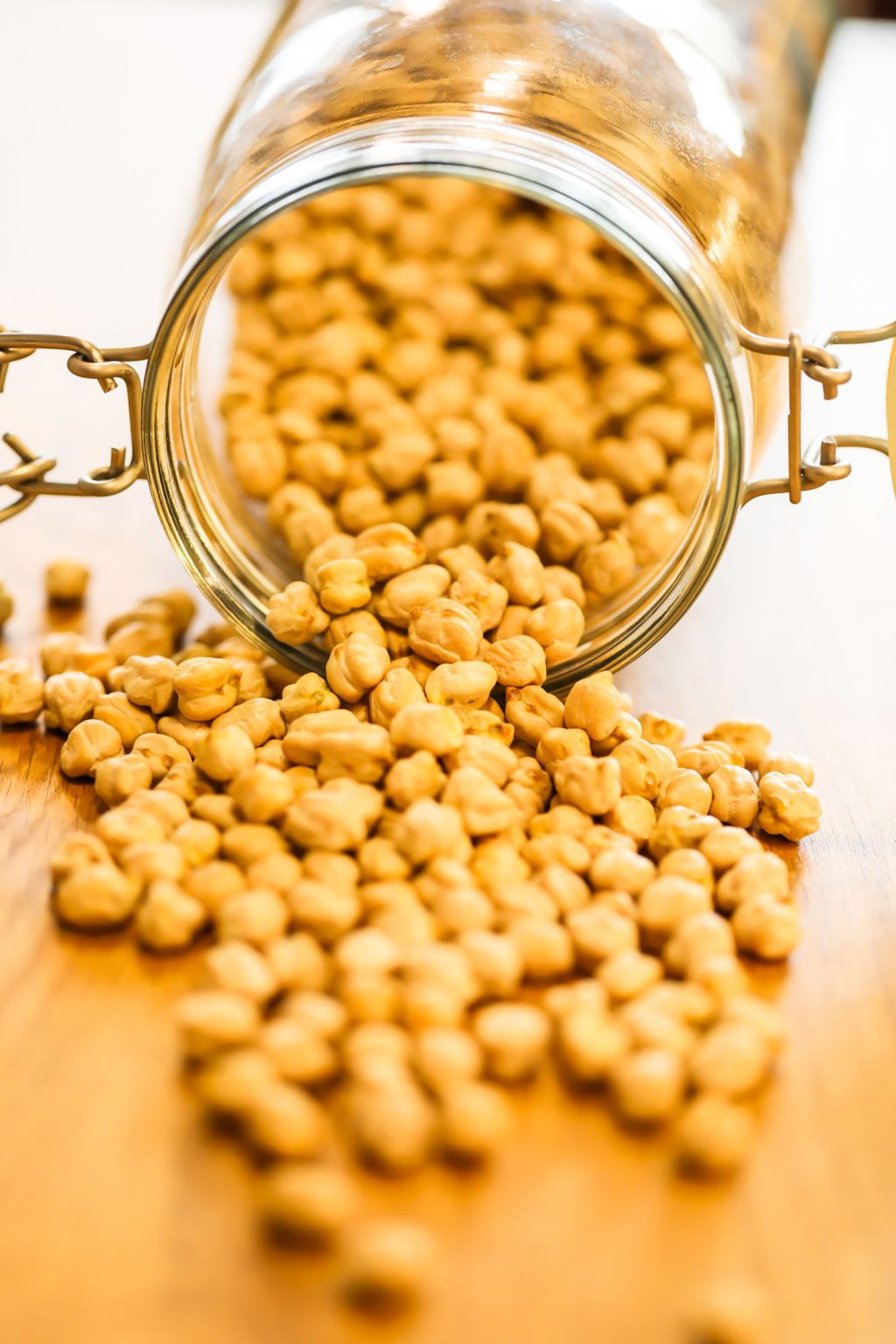 In most Arab countries falafel is made from chickpeas, spices and herbs.

In Egypt this dish is made from fava beans which is the original form of the recipe.

There are some recipes that are a combination of both chickpeas and fava beans.

One of the reasons I love falafel is not only because it tastes good, but because it is so healthy.

There is a ton of goodness in falafel whether made from chickpeas, or fava beans.

But it depends on how you eat them.

Like anything deep fried, falafel should be part of a wider balanced meal.

Falafel has a good amount of fiber, and is probably more healthy when made at home.

If you bake or pan fry it will in fact be more healthy for you.

But when I think of that I feel like it would be sacrilege to do that!

A deep fried falafel is a real falafel! 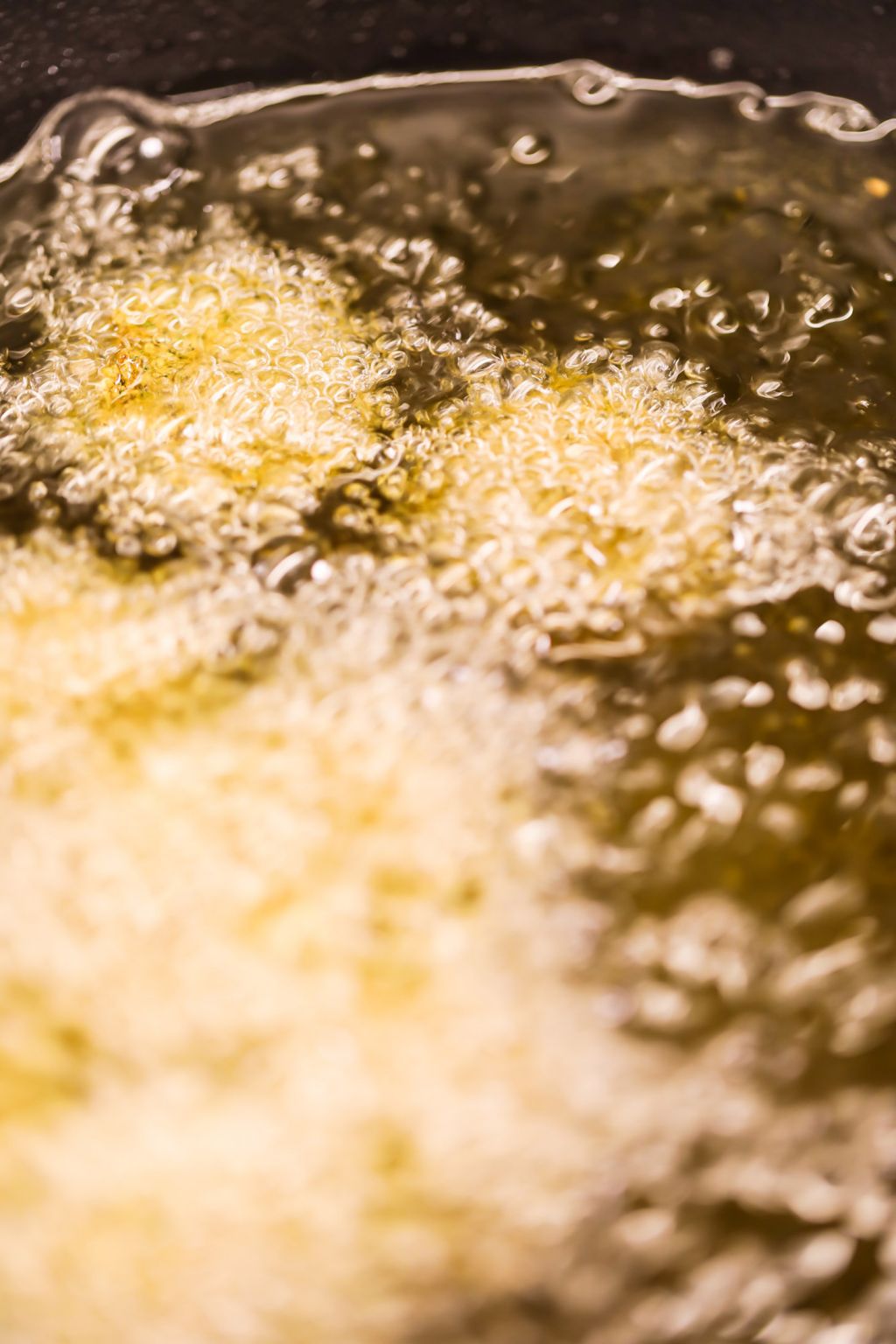 The original recipe for falafel is one hundred percent gluten free.

But you do need to be careful when eating falafel at eating establishments who can add other ingredients.

I have seen recipes that have included breadcrumbs of all things.

One of the challenges for falafel is in it binding, if the mixture is too wet, it will fall apart when frying.

Some people remedy this by adding breadcrumbs or even flour which of course are not gluten free.

You can get around the binding issue just by making sure your mixture is not too wet.

If it is, you can use chickpea flour, and I heard of people even using oat flour to keep it gluten free.

So I would just say buyer beware, and check ingredients.

Again, they are meant to be vegan if traditional recipes are used, however you must be aware of ingredients.

I have seen people use eggs in their falafel again to get around the binding issue, and maybe to get them to puff up a bit.

Falafel should also be dairy free.

These days all kinds of other ingredients are added to things like falafel in an effort to ‘jazz’ them up.

How to Make Falafel (Gluten Free)

The first thing to do is to soak the chickpeas overnight to rehydrate and make soft.

Be sure to cover the chickpeas generously with water since they will soak it up overnight.

Drain and dry chickpeas in the morning and place them in a food processor.

Add the spices, garlic, herbs, baking soda, and onion if you are using one.

Process until you have something that has the consistency of a kind of dough.

You want it to be gummy and stick to itself.

If too wet, drain mixture in a fine sieve allowing extra liquid to run off.

If still too wet, you can add chickpea flour to dry up a bit, but you need a good balance.

Make sure it’s not too dry because it will crumble when fried.

Either using a specialized falafel mold or a spoon to shape the mixture, make into small ball shapes.

As you shape the falafel drop them into the hot oil, being careful not to let too much time pass between dropping in the oil.

Fry until light golden brown turning falafel in the oil for an even cooking through.

Other ways that this mixture can be cooked is to make patties, add oil and pan fry.

You can also bake the falafel in the oven on a baking sheet.

Bake in a preheated oven for about 15 minutes each side or until crispy.

What to Eat with Falafel 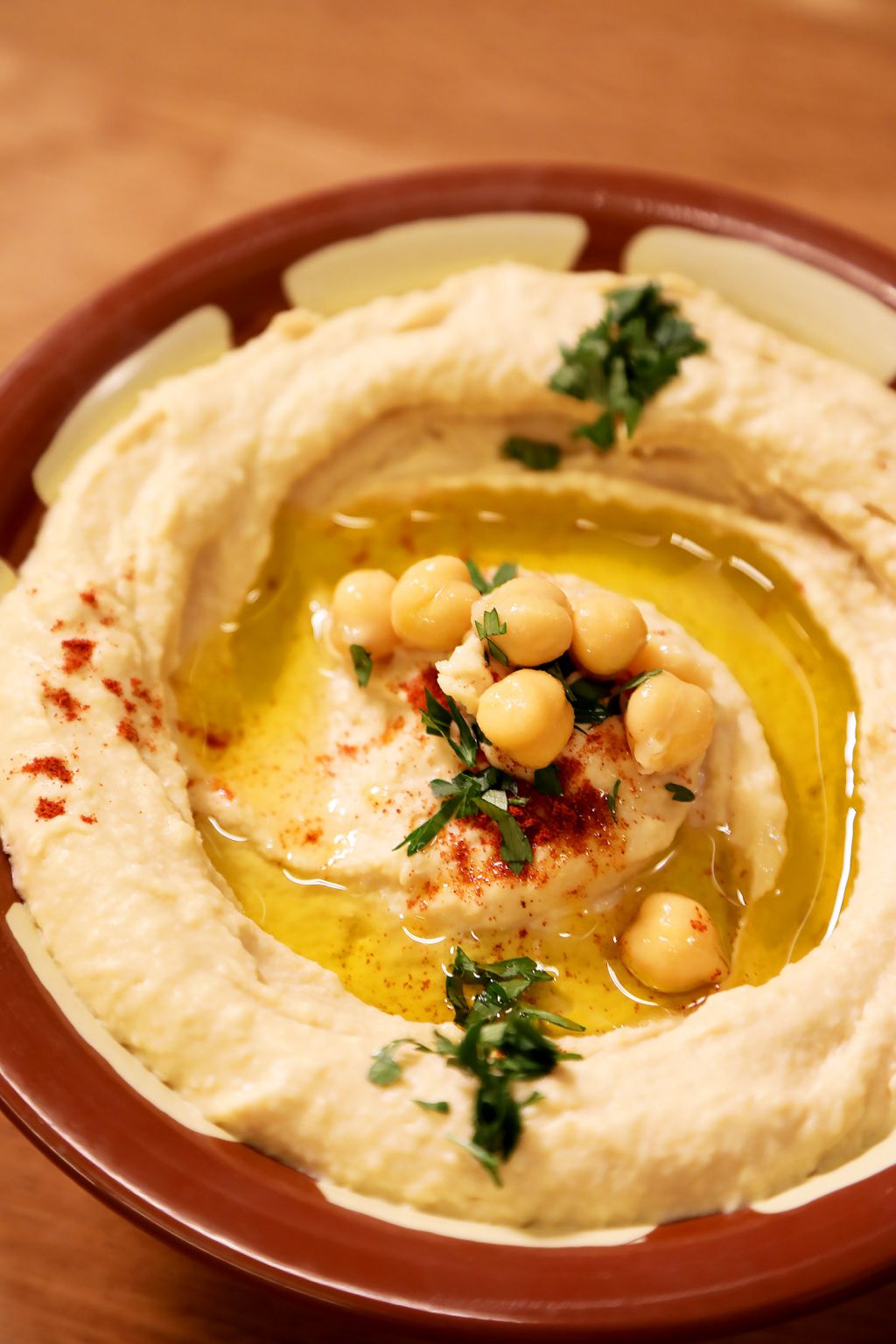 There are so many things to eat alongside falafel.

Traditionally a breakfast food, falafel is often eaten alongside hummus, fuul and labneh.

Most often breakfast will be accompanied by pita bread, eggs, and maybe zaatar and olive oil.

Some people like hot sauce, or crushed pepper and garlic marinated in lemon juice, as an addition.

Falafel is very frequently served with a tahini, yogurt and lemon juice that is wonderful as a dip.

Extra onions, garlic mash with olive oil are all things you will find on the table.

Another thing I like as an addition to my falafel sandwich is turnip pickles.

These are made by cutting turnips into baton shapes and then pickling them alongside a few chopped beetroots for color.

They will also do the same with cauliflower and I can tell you it’s delicious.

Now, falafel can also be served as a lunch food and be included as part of a mezze.

On the lunch table you will find lots of other mezze dishes like baba ghanouj, or fried halloumi.

I recently had lunch out at a local restaurant and had falafel as part of my mezze.

They also served shankleash which is a kind of fermented cheese salad, and very good too.

We had chicken livers, manakeesh, a type of flat bread with zaatar and olive oil.

All of this before the main course of grilled meats.

Lamb, and chicken kebabs, along with lots of grilled tomatoes, onions and peppers.

It was a lovely feast! 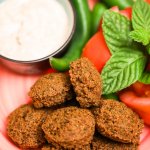 Fresh vs Dried Herbs – A Guide

How to Freeze Zucchini for Best Results