These Lebanese desserts are shared throughout the Arab countries of the Levant.

Every country has its own twist on each one, and they are all pretty darn good dessert recipes!

Traditional Middle Eastern desserts are quite different to desserts in western countries.

Common flavors used are of rose water and orange blossom water with their subtle sweet fragrance.

There are several Lebanese recipes of cheese based desserts with a sugar simple syrup poured over the top.

Cream fillings, kind of like a clotted cream known as ashta cream, are common.

Desserts are often finished or topped with nuts.

Arabs tend to have a sweet tooth and love a good dessert.

There are many sweet shops that offer a whole range of traditional desserts that get  crowded on weekends.

And on warm summer evenings as families go out for a treat you are very unlikely to find any place to sit.

Many of these desserts are incomparable in taste when fresh.

Any more than half an hour old, and you miss the true experience, and so these desserts are often consumed on the spot.

It is so much fun to stand in the dessert shop while trying to decide on which yummy treat it will be this week.

Here are a few of my favorite Lebanese desserts. 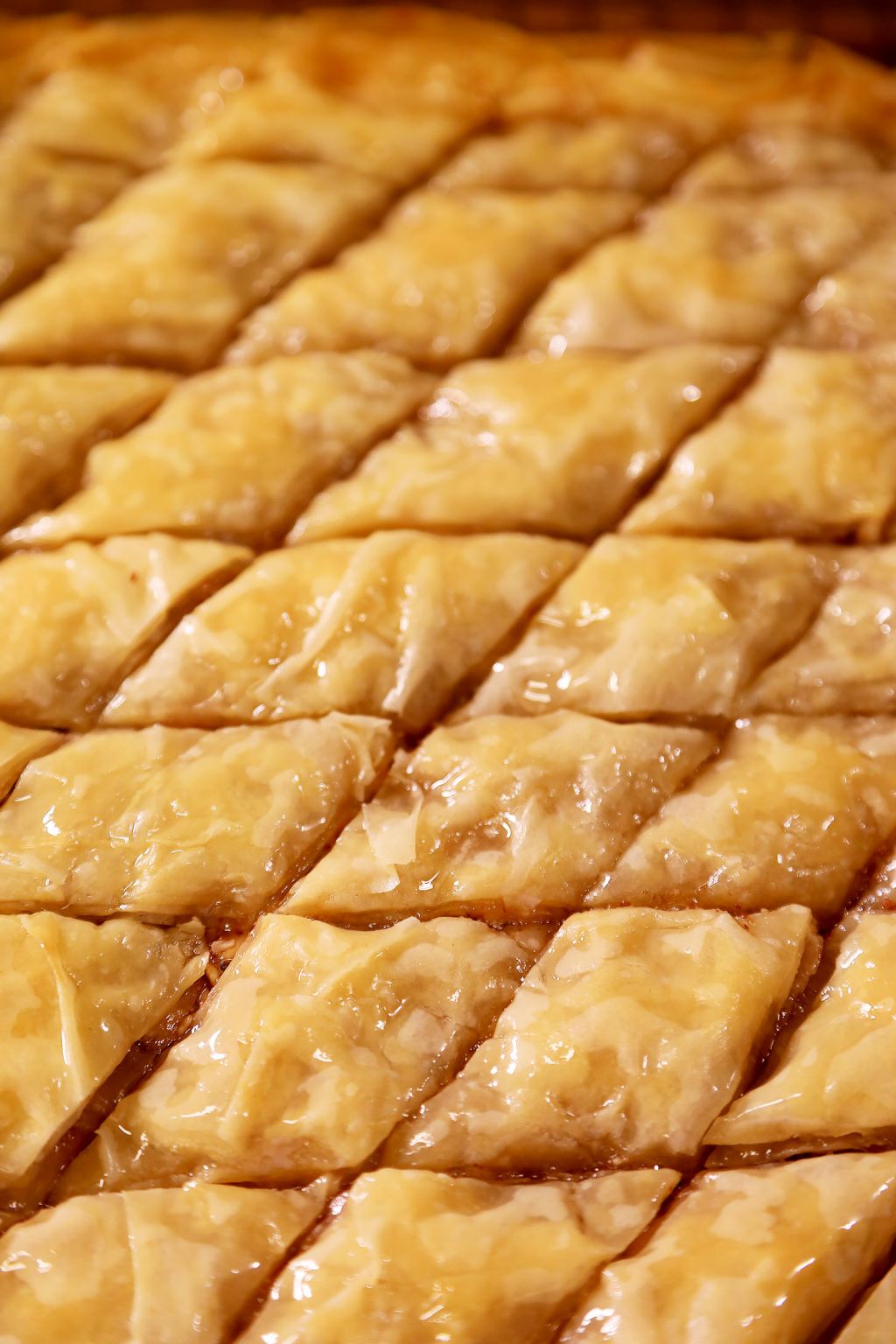 This is a well known dessert all over the world.

Made of pistachio or cashew nuts sandwiched between several layers of phyllo dough.

Baked and drenched with simple syrup, giving you a combination of sweet, buttery, and crunchy..

Absolutely delicious and well worth the extra calories consumed, but I swear when I close my eyes I don’t see ANY calories! . 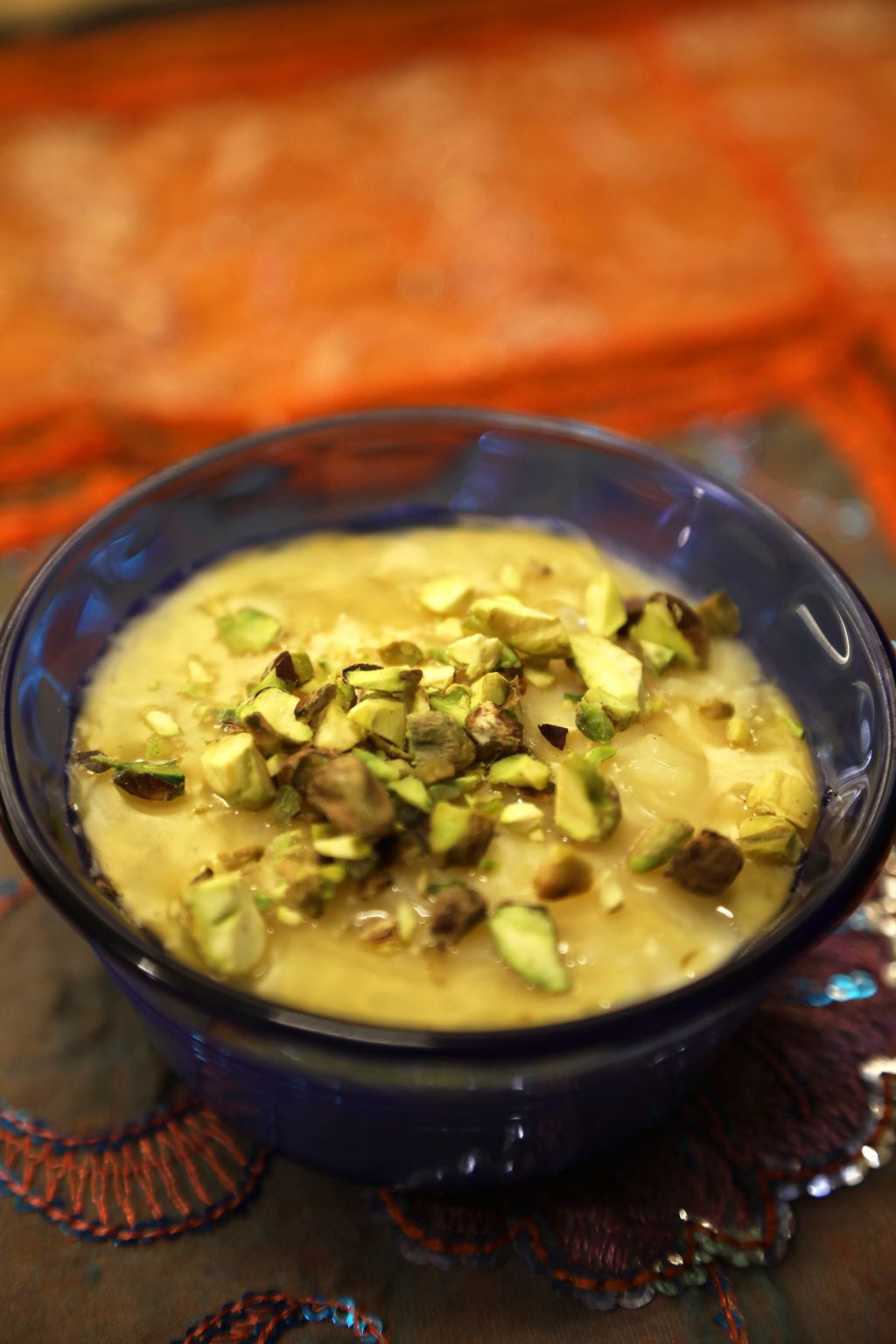 Made with short grain rice, and milk, topped with chopped pistachios, and dessicated coconut, make it lovely and creamy.

But extra delightful with a bit of maple syrup drizzled over the top, which is a modern Arab American twist.

Rice pudding is a comfort food for many around the world, this particular recipe is traditionally Levantian in flavor.

This dessert was invented in Nablus, a city in Palestine, and has made its way all over the world.

Made with a base of local white soft cheese and a topping of either semolina or a type of shredded wheat, then smothered in sugar syrup.

There are two versions of this dessert depending on which topping is opted for, and both are delicious.

Known either as smooth (naameh) with the semolina topping, or rough (khishnah) with the phyllo topping, this dessert is to die for.

Both good, however, personally I prefer the rough version myself, I like the extra crunch in my Arabic sweets.

Try knafeh with ice cream for an amazing experience of goodness from the Middle East.

What a great dessert this is!

It is a kind of a stuffed cookie, made with semolina flour, and a sweet filling.

I love the date filled ones, which are just too easy to eat especially when they come in bite size versions.

These sweets are eaten year around, but  especially served to guests during the two main feasts each year in the Middle East.

This is only made fresh during the feasts when people are celebrating.

That’s right, you got it, two versions of this one too!

Qatayef are essentially cakes cooked on one side, until cooked all the way through.

Then the filling is put on top and the pancake is folded into a half moon shape and sealed shut on the edges.

Finally it is deep fried and then dipped into simple syrup to soak up all the sweetness possible.

It is to die for!

Roasting hazelnuts enhances their flavor and gives them a lovely crunch.

Roasted walnuts can be found in a variety of recipes when an extra crunch is required.