This has to be one of the most entertaining, and well written books that I have read in a long while. 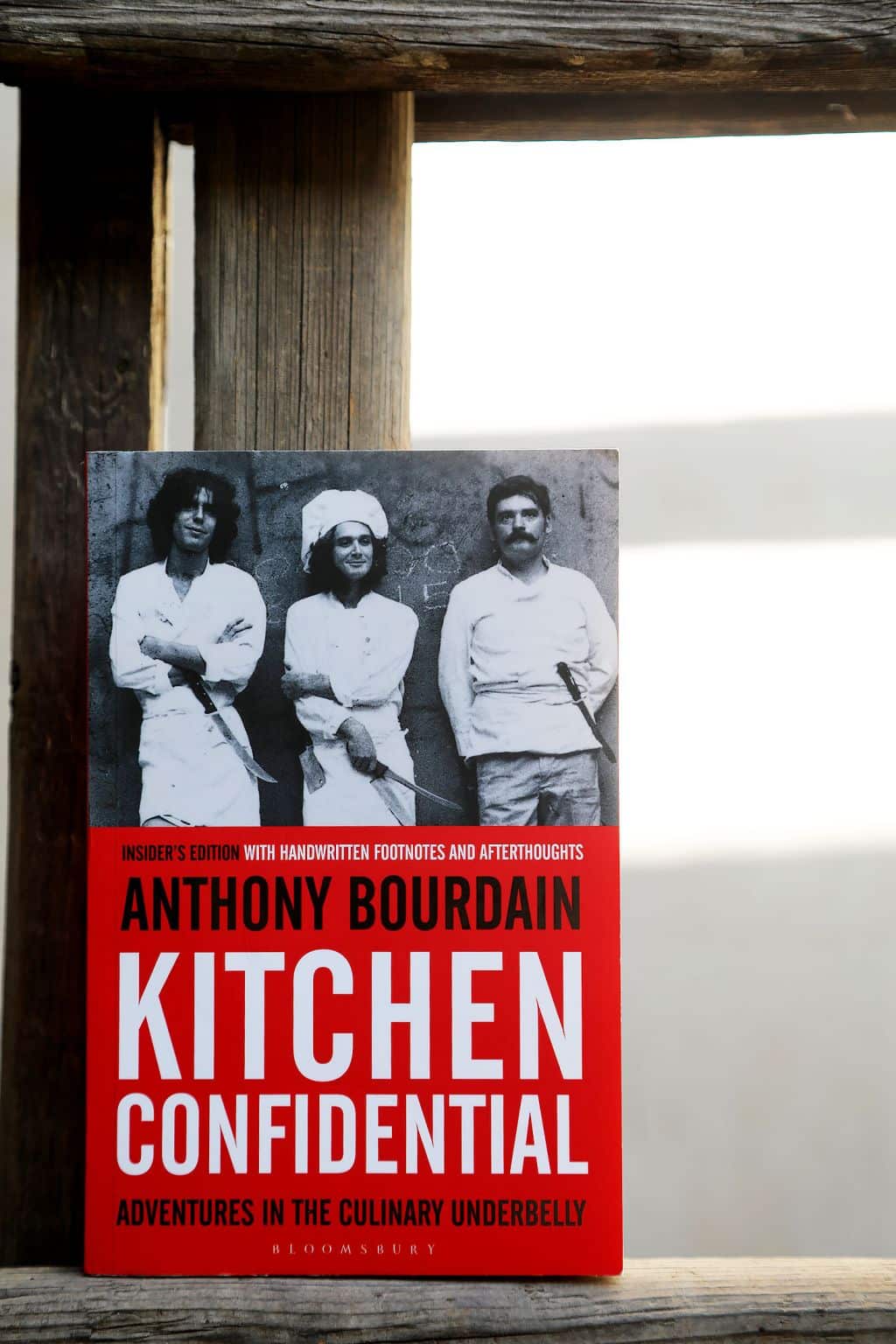 This has to be one of the most entertaining, and well written books that I have read in a long while.

Anthony Bourdain was a gifted writer and storyteller, who lived the life of a chef, and making an impact on the world of food.

He has written several books, all good in my opinion, but this one stands out because it sheds light on a world that most people knew nothing about.

It also reminded me of the days of working the thankless jobs in a commercial kitchen.

I never rose to executive chef, so I don’t have the same experiences of running a kitchen, but  I was a pastry chef for a while which is a bit like being the master of your own domain.

Beginning with a story about the moment that he developed an appreciation for good food, Bourdain takes us to a family holiday cruise when he was a boy.

He was not impressed by most things he was given to eat until he was served ‘vichyssoise’ which is a thick soup of leeks, onions, potatoes, cream, and stock.

He had just finished fourth grade at the time.

Unusual for someone at such a young age to become so infatuated with food.

But here began a lifelong love for unusual and exotic food.

He goes on to describe what it took to work in a professional kitchen describing the different people he came in contact with over the years.

He talks about the bad decisions he made early on in life and how that affected his experience going forward.

He offers advice to would be chefs who would like to get in the industry.

He demystifies the workings of restaurants while discussing the hard drinking and drug taking lifestyle he was living.

Bourdain’s desire to experience life to its fullest is what drove him during his early years, before he decided to clean up his life.

He discusses all the different experiences he had in restaurants, and how those experiences shaped the person he became.

Bourdain describes all the players in the kitchens and restaurant through entertaining chapter titles, such as, Food is Sex, and Food is Pain.

He talks about how his sous-chef was closer to him than his wife, because of all the time they spent together.

He also writes about how his sous-chef was his problem solver and fixer; a person he relied on to make it through the working day.

He muses accurately about the wave of busy times, and lulls, describing the feeling of the quiet before the storm that comes ahead of every rush when all hell breaks loose in the kitchen during service.

But most interesting to me are the characters he describes, those who worked with him, and those he worked for.

The kitchen world I remember was always full of interesting and unusual characters.

So many of us come into contact with restaurants, and eating establishments on a weekly basis at least, and yet many have no idea what goes on behind the kitchen door.

Even in these open kitchens, that are so popular with diners, have a kitchen door beyond which the general public does not see.

The real kitchen, the one unadorned with ‘atmosphere’ of a restaurant, a place where utility takes precedence.

Behind the kitchen door is an entry into another world, one that Bourdain describes as the culinary underbelly.

A world I know well, having spent many years working there.

Who was Anthony Bourdain?

Anthony Bourdain was a university dropout who rose to be an executive chef working in many of New York’s restaurants.

He went on to be a bestselling writer when he recounted his kitchen confidential adventures, most famously warning readers, among other things, not to order fish on a Monday.

From the restaurant kitchen to the dining room, Anthony Bourdain uncovered all the secrets, and depicted the rough and strenuous life for the many people caught up in it, all from the perspective of a New York Chef.

Bourdain went on to star in multiple television shows, and even had a fictional show based on him with Bradley Cooper playing the role of his character.

Adventures in the culinary world were made intelligent, and personal by Bourdain’s writing style.

He was willing to go places other people wouldn’t in search of a good story, and a good meal.

He shone a light on the restaurant business, and the world of professional cooking, a world not many people knew much about.

To learn so much more, be sure to read this book.

The tragic news of his death last year was a stark reminder that so many people in the world carry their internal struggles with them on a daily basis, never showing the world what they are really grappling with in their lives.

Not until the headlines that he had died at his own hands did the wider world know that something was wrong, that this talented soul felt he just couldn’t go on with life.

The disbelief that followed was widespread, people wanted to know how this famous, rich, and successful celebrity would do such a thing.

What was he thinking, he had so much to live for.

He had everything going for him: best selling books, TV shows, and a golden reputation as an all around good guy, willing to go anywhere to learn more about food, and new cultures.

Asking questions and then really listening to the answers, not judging the people he came into contact with.

Why would he do it?

We so often connect worldly possessions to happiness, thinking that people who ‘make it’ in life through tangible successes, and the ownership of things, must automatically be happy.

No more worries, they have the resources to fix every problem.

This is a very misguided view of success.

I wish I had had a chance for a conversation, the opportunity to have shared notes on such a fascinating, and dynamic industry, one haunted by stereotypes, and misunderstandings.

He was not judgemental, like so many others can be, partly because he knew he belonged to that kitchen underworld, where the less than perfect, the troubled, the misfits came together in an odd yet supportive way, holding each other together through friendship as they made their way in this most transient of professions.

In my experience the culinary world has a higher ratio of people using alcohol and drugs, and taking part in self destructive behaviours, than other occupations I’ve been in.

Many chefs I’ve worked with drank like fish, and several had drug problems as well.

In my day once food service was done, and things cleaned up, the front of the house staff along with kitchen staff would usually end up in the bar and drink the rest of the night away.

The commercial kitchen draws all kinds of people into its anonymous depths.

People earning money for school to better their lives, working alongside people whose life plans may not have gone the way they had hoped, alongside immigrants, and others hiding in the shadows.

It’s a world where everyone is in it for themselves as they prep their stations over and over everyday.

And at the same time there is a communal feeling where they know they can count on each other when service begins.

The whole focus becomes about the food and getting it out on time.

I found the people of the kitchen (myself included) want to feel connected, but prefer doing it from a distance, if that makes sense.

How do I get close from far away, how do I find that human connection without being vulnerable?

In this case by creating a wonderful meal for a total stranger, creating an intimate bond for one person at a time.

In Kitchen Confidential, Bourdain encourages his readers to have the confidence to prepare food the ‘restaurant way’ as he shares the skills that he developed over the years.

He also talks about his trips to foreign countries, Japan in particular, which left a big impression on him.

He is able to make his stories compelling to people with and without experience of what he is writing about, whether about his international travel or time in the kitchen, or struggles with drugs or just plain old life.

His writing style is very engaging, amusing and often profanity laced, just like I remember the language used in many of the kitchens I’d worked in.

To anybody who is interested in food I would say read Kitchen Confidential, you will be pleased you did.